Mobvoi has launched a new high-end fitness smartwatch in India, the TicWatch E3. It runs Google’s Wear OS platform and is priced just under Rs 20,000. The device faces stiff competition from brands like Fitbit, but the E3 packs quite a punch. It offers Qualcomm’s latest Snapdragon processor as well as health features.

The company has also confirmed to IndianExpress.com that the TicWatch E3 will get the next Wear OS 3 update in January or February next year, which isn’t too far and a good thing. It is worth noting that this will be one of the few smartwatches to receive this update. Does that mean you should buy this smartwatch? Read on to find out.

TicWatch E3 looks good at first glance. It features a plastic build, which helps keep the weight down. But it doesn’t feel as premium in comparison to other watches in the higher-end segment. At first glance, it might seem like it has a metal dial or body, but that isn’t the case in reality. This also doesn’t mean that the build quality is not good enough. It is solid and won’t disappoint. The E3 also looks a little big on a slim wrist.

For navigation, the company has added two buttons on the right side. The top one can wake up the screen, shoot up apps, and act as a back button to navigate to the home screen. You can also use the same button to activate Google Assistant by long-pressing it.

The second button brings up the TicExercise app, which includes workout modes. You can customise the function of this button by long pressing the watch’s second button, which I liked as I prefer to have music control as a primary option.

It is worth noting that you will find most of the sensors and other settings on the smartwatch, and you won’t be needing your smartphone for changing anything. As this smartwatch is based on Google’s WearOS, it supports Tiles. The latter is a great tool to quickly access the info you want, including weather updates, daily activity, breaking headlines, heart rate, etc. You do get the option to rearrange Tiles as per your requirement, but there is no option to create your own Tile.

The TicWatch E3 is IP68 rated and one can take it for swimming or showering, but avoid deep-sea diving with it. There is a feature called Speaker draining, which when enabled plays some sort of audio trill to remove any water that might have accumulated in the speaker. This feature is accessible by long-pressing the second button on the watch.

The E3 ships with a 1.3-inch (360 x 360 pixels) LCD display. The panel is protected by 2.5D glass. During my usage, I noticed no scratches on the smartwatch. The TicWatch E3 has broad bezels and good sunlight legibility. The text on the device was also sharp enough.

There is no ambient sensor, which would have helped managed brightness levels in different lighting conditions. The company has tried to offer a solution to this. You can simply double-tap the first button on the watch to increase the brightness. The device automatically reduces brightness levels (to the previous setting) after a few minutes when it detects you are not using it.

I had no issues in navigating the UI and the smartwatch was able to fire up the apps and everything else without any stutter or lag – thanks to Qualcomm’s latest Snapdragon 4100 SoC. It is worth noting that one will rarely find this chip on smartwatches.

The TicWatch E3 can measure your SpO2, which is also known as blood oxygen levels. I compared the watch’s data with an Oximeter and the readings were not always accurate. The watch showed low SpO2 (94 or 92 percent) and sometimes 96 percent. The Oximeter, on the other hand, showed normal most of the time (99, 98, 97 percent). The watch lets you set alerts for low SpO2 levels. The smartwatch nicely displays SpO2 data in a graph to give a quick view of your existing day’s data as well as the full week’s record.

The smartwatch can automatically detect oxygen saturation every hour, which is good. The company’s Mobvoi app detects blood oxygen levels at night too. However, the app doesn’t display SpO2 levels on a daily basis in the sleep analysis segment. This is visible on the smartwatch when I visit the TicSleep app.

I liked the fact that I get to check a detailed enough report on my sleeping patterns on the smartwatch. The TicWatch E3 managed to offer accurate sleep data most of the time. Although, it missed a few of my short nap sessions. It instead registered me as “asleep” when I was watching a movie, but this happened only two times. The smartwatch automatically registers your (day and night) sleeping patterns. While some of the watches mix up day and night data, this didn’t happen with E3, which is a relief.

The Mobvoi app shows detailed data on light, awake, deep, and REM sleep cycles. You also get to check average, minimum and maximum heart rate. There are some nifty features too, which you can set directly from the smartwatch. The TicSleep app lets you set a bedtime reminder, and it will wake you up at the optimal time of your sleep cycle or whatever time you have set as per your regular work schedule.

The wearable can also continuously monitor your heart rate, but there is no option to change its reading time, similar to other TicWatches. The heart rate data offered by the watch seemed fine. The Mobvoi app just offers a graph, which doesn’t give a very detailed view of heart rate readings, but it might be enough for some. I would love to see heart rate readings on an hourly or minute basis in the app, similar to how some of the wearables offer.

There is stress monitoring as well, but it takes more than 3 minutes to give you results and it requires you to stay still during that time. Also, the data doesn’t seem to be as accurate and well explained.

I noticed that the TicWatch E3 didn’t register steps when I was travelling in a car. I’m happy that the wearable offered reliable data in terms of distances and steps. This was expected as the device supports GPS and a barometer, so I was able to track my outdoor sports activities without carrying my primary phone. For music, you can download a few tracks on Spotify and then listen directly from the device.

On the watch, you can easily swipe downwards to access the Spotify app even after you stop the music, which is nice as the budget TicWatches don’t offer a quick way to access the app to change or play/pause music. Once you open the Spotify app, you will be able to access everything that you see on the phone.

There is a TicExercise app, which includes outdoor run, outdoor walk, cycling, indoor cycling, pool swilling, machine rowing, elliptical machine, mountaineering, yoga and other workout modes. I mostly used Outdoor Run and Walk modes. The smartwatch took close to two minutes to find a GPS signal, after which it recorded distance without any issues.

The smartwatch has a speaker as well as a microphone, so I was able to attend to a few phone calls from the watch. As the watch supports Google Assistant too, you can use it to get directions or the latest weather updates or activity data. There is also a Voice Memo app on the watch, which can be used for quickly recording voice. You also get to play the recording on the watch. I liked the fact that the Mobvoi app also transcribes the voice note. There is also a feature to take screenshots of the watch faces.

The smartwatch showed me notifications of all the apps, which is nice as a lot of wearables fail to display every message or notification. It supports a smart reply feature too, which helped me quickly respond to my WhatsApp messages via the watch. I never experienced any connectivity issues as well.

I got a maximum of two days of battery life with heart rate, SpO2, and other sensors set to run 24-hours. I kept Always-On Display (AoD) off, tilt to wake up on, and brightness to around 60 percent. I also used sleep tracking, music control, and checked notifications. The workout modes drain a lot of battery, so with that, you will get one day of battery life. But, this again depends on how much you are using the watch, so you might get more than a day’s battery life even with workout modes.

There is an Essential mode, which one can enable to get slightly longer battery life. This mode supports tilt-to-wake up the screen and only shows the date, time, step count, heart rate, and a battery indicator when you enable it. If you wear it at night, it will still track your sleeping patterns even when the Essential Mode is enabled.

There is an option that lets the watch automatically turn on Essential mode at a certain battery percentage, which you get to select. You can also add an auto-switch timer for this. The Essential mode limits several features but helps save some more battery. I liked the fact that it gives the basic details – Steps, heart rate, and sleep data. It takes about two hours to charge the TicWatch E3 from zero to 100 per cent.

The TicWatch E3 has a good enough display, but it even has big bezels around it. In 2021, a smartwatch that cost around Rs 20,000 is expected to offer slim bezels and edge-to-edge display for a better experience. Users can use black watch faces if they want to avoid the bezel.

The company says the smartwatch can continuously monitor your SpO2 and stress levels. But, you get to see the data in a graph, which doesn’t offer detailed information, so it might not help many in a big way. The company says that the Ticwatch E3 supports NFC payments with Google Pay, which is good. But, this app was not available on the Play Store and the watch doesn’t come pre-installed with it.

The TicWatch E3 is a feature-rich smartwatch, which can act as a good workout companion. It can offer up to two days of battery life even with moderate usage, which is impressive. It is even equipped with Qualcomm’s latest Snapdragon 4100 chipset and will be receiving the upcoming Wear OS 3 update, which makes it one of the best options. With this update, one can expect a much better experience in terms of both performance and battery life. Alternatively, you can also consider buying the Fitbit Versa 3 for a slightly better experience, if you looking for any other high-end wearable. 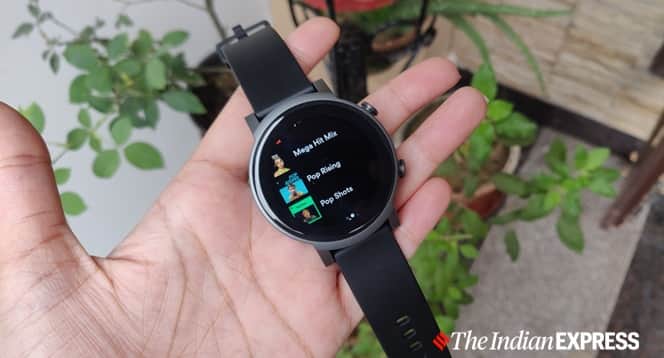